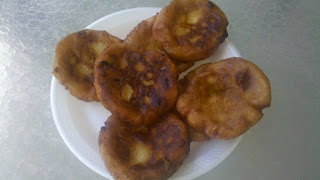 It's my first time to try this snacks. They say it's an Ilocano delicacy. It is similar to what we call Maruya or battered and crisp bananas. But my friend used Gluten rice flour. Her version doesn't have squash or karabasa/kalabasa and she added butter to it too. Below is the recipe that I've found online. You may use it as a reference.
Baduya Karabasa Hawaïï
20 oz. Mochiko ( Gluten rice flour )
3/4 c brown sugar
1 c cooked and mashed pumpkin (karabasa)
1 can coconut milk
oil for deep frying

Mix mochiko, sugar, pumpkin and coconut milk together until a soft dough is formed. Heat oil. Drop by tablespoonful into hot oil. Cook until golden brown. Balls should float to top of oil when done.
Posted by Felicity at 1:15 PM