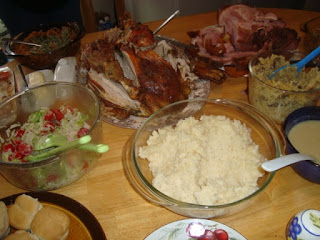 Hubby made a Honey Baked Ham last Thanksgiving and Christmas for us to enjoy with. We didn't prepare the dinner but we just brought the baked ham to his son's place where we spent our Christmas. The ham was tasty and I liked it. We even had left over ham and we brought it home for ham sandwiches. Left over Ham can be also cooked to make a delicious dish. The other slices were wrapped in aluminum foil and placed in the freezer. We will just defreeze it when needed. Below's recipe is a copycat from the Top Secret Insider's edition cook book.
1 fully cooked ham
1 cup sugar
1/4 tsp. ground cinnamon
1/4 tsp. ground nutmeg
1/4 tsp. ground clove
1/8 tsp paprika
dash ground ginger
dash ground allspice
Partially slice ham quite thin. Mix remaining ingredients and
spread on wax paper. Roll ham in mixture. Then, use blow torch
with medium flame to caramelize sugar. Wave torch over sugar
with rapid movement so that sugar bubbles and browns but doesn't
burn. Repeat several times until ham is well−glazed. Serve ham
warm or re−heated.
Posted by Felicity at 5:05 PM