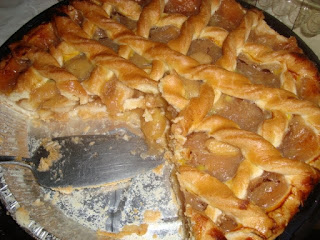 This is a copycat recipe for Ruby Tuesday Apple Pie from the Top Secret Insider's Edition recipe book. It has always been a tradition for Sharon's Mom to bake a pie every Thanksgiving so last time, we had this apple pie. It tasted good as always. I would try to make one someday. Though I am not really a fan of apple pies but I want to try it. My favorite is pecan pie but I still eat other pie flavors. Enjoy this recipe!
1 (9−inch) frozen deep−dish apple pie (double crust or
old−fashioned)
1 stick Butter
1 Cup Light Brown Sugar
3 1/2 tsp. Cinnamon
1/4 tsp. Allspice
1/4 tsp. Ground Clove
1 1/2 tsp. Lemon Juice
3/4 Cup flour
1/2 Cup sugar
10 Tbsp. frozen butter
1 1/3 Cups chopped walnuts
Ice cream (optional)

Let pie thaw at room temperature for 30 to 45 minutes.
Preheat oven to 350 degrees. In a small saucepan, melt the stick of
butter over medium heat. Add 1/2 cup brown sugar, 1 1/2 teaspoons cinnamon,
allspice, cloves and lemon juice. Stir until well blended and sugar is
melted, about 3 minutes. Make an X in the center of the top crust of the
pie and fold back the crust.
Pour the butter mixture evenly into the pie and then replace the crust.
Leave 4 vent holes, sealing the rest of the pastry.
Bake for 30 minutes.
Remove from the oven and set aside. Reduce heat to 325 degrees.
Grate frozen butter into a medium−sized bowl. Toss the grated butter with
flour, remaining sugars, remaining cinnamon and walnuts.
Carefully wrap an aluminum foil band around the edge of the pie,
creating a lip to hold topping. Sprinkle topping evenly over pie.
Bake for 30 to 40 minutes. Let rest for 10 minutes then
serve with ice cream, if desired.
Posted by Felicity at 2:29 AM