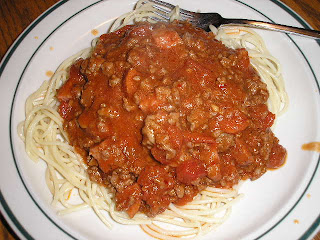 It was my first try to cook spaghetti so I took pictures of it. I got a lot of feedback from unknown people about these pics. They thought, that it's my first time to try eating this that's why I got pictures. Maybe they haven't utilized yet the power of technology nowadays. Sad to say, they haven't realized the importance of pictures in a person's life. Microsoft even invented a camera that will take pictures every second or every minute... For according to them, a second of your life is part of your history. I am glad I took these, or else, I have nothing to talk about or share with you guys. As for those people who have nothing to do but just mind other's business, well, i just hope that one day, technology will also tranform your life. I bet it has already (part of it lol), If you have entered the internet world. 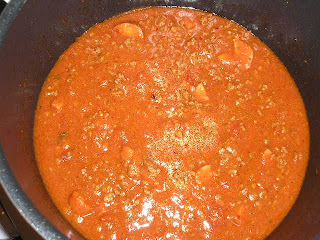 I like the Pinoy Sweet-Style spaghetti. I miss Mom's cooking. She is the only one who cooks spaghetti in the family. I never had the chance to observe her and follow her recipe. But I had tried cooking it with the help of my hubby. The pasta was easy. We just followed the cooking directions on the package. Hubby taught me how to know if the pasta is cooked. You just throw a piece of it on the wood cabinet and if it sticks, it's done lol. Up to now, that's how i check the pasta if it's cooked or not.
We had 2 lbs of ground beef and a bottle of spaghetti sauce. We cooked the beef first on a skillet without putting oil. After that we added the sauce. If ever I'll cook on my own, I'll gonna include garlic, onion and red bell pepper. But hubby's way didn't need it. He said it's all in the sauce. Also, I like to put condensed milk as what my Aunt Arlene in Philippines has told me. She said it will be delicious if you want a creamy spaghetti ( I tried it later and it tasted good). Also, instead of adding sugar, the condensed milk will be a substitute. But as usual, hubby didn't like it. So we only added salt, pepper and sausage. It tasted good. 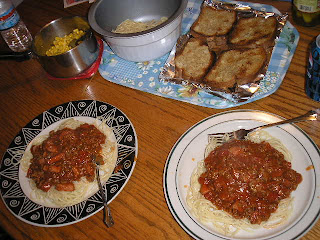 While cooking, hubby prepared garlic bread and sweet corn. So sweet of him :)
Posted by Felicity at 7:36 PM

wow yummy. same here whenever i get the chance ill take pictures jud dayon even on simple and common things like food in restaurants, hahahha.