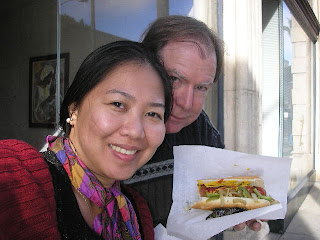 January 1, 2008-We were at Pasadena, CA witnessing the beautiful Rose Parade. It is done annually and this year, we were lucky to see it. We went to Disneyland a day before that. We spent our New Year celebration there and gosh! There were a lot of people. We waited on a very long line just to try the newly-opened submarine ride of Disney's Finding Nemo. I loved it! Not only with that ride, there were also longer lines with the other rides like Splash Mountains, Space Mountains and more. And the midnight party was great! Great music and great crowd :)
At the main street of Pasadena, there was a family selling hotdog sandwiches. It smelled good that I was tempted to try one. Frank also bought one for himself. After the parade, lots of people from different cities walked out from the venue. Like us, they also bought hotdog sandwiches on their way home. The parade lasted long and made us so hungry. And that sandwich really tasted good. I even tried making it when we arrived home. Its ingredients were mainly green bell pepper, onions, hotdog , hotdog buns and the dressing, ketchup, mustard and mayonnaise. The pepper and onions were sauted on oil. The hotdogs were fried and the buns were heated on the hand-made pan. It was quick and with a squeeze of mayonnaise, ketchup and mustard, the sandwiches were ready to go...and opppps, we didn't forget the jalapenos of course :) the jalapenos were fried too :) tasted good! I'm drooling...fattening huh but it's good if you'll only eat once in a while. I haven't tried eating hotdog sandwiches like that since then...I'll try again next time.
Posted by Felicity at 11:10 PM

Hello visiting again here!!I just finished changing my layout and i am nominated for new customize layout..Please do vote for my Janeth Vicy's Life Journey..Thank you and God Bless!!